An assortment of photographs — some of which have several people who are unidentified. Captions and notes are beneath each photograph. Any help in identifying some of these folks would be appreciated. Of course, we'd be delighted to add old school photos you might care to share from any of the schools in the county. We're top heavy with Chadron High and would like to add more Chadron Prep, Crawford High, Assumption, Belmont, Whitney, etc. photographs – including elementary schools! You'll note that we also include some photos from Chadron State College. It is, after all, in Dawes County! Contact us at galeymedia@gmail.com. We also invite you to visit our website at Dawes County Journal.
Read More 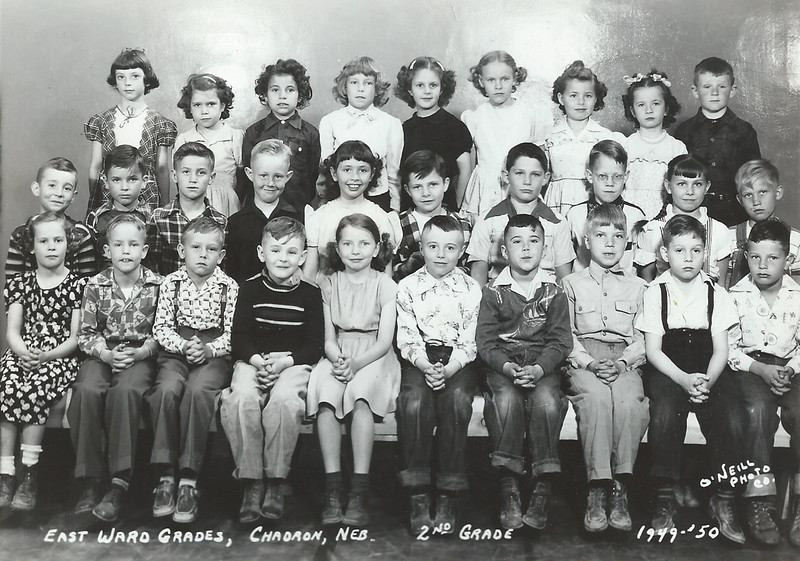 
3rd Row (i-r) ?, ?, Janet Homan, Sally Bauman, Jean Gatzemeyer, Sharon Konrath, ?, Lorraine Petrig, Don McDowell Comment: kids that I recognized immediately were Jimmy Saults, Gordon Goodrich, Charles Tuma, Dennis Parks, George Blundell, Billy Atkinson, Sally Bauman, Jean Gatzemeyer, and Lorraine Petrig. On the back of this photo in my second grade printing are 15 names with 29 kids in the photo. The names are Sally, Phyllis, Jimmy, Jean, Kay, George, Mary, Donnie, Raymond, Raymond A., Phyllis B., Roland, Jerry, Billy, and Jim. As noted, I recognized Sally Bauman, Jimmy Saults, Jean Gatzemeyer, George Blundell, Billy Atkinson, and myself. From the third grade faces and names, I Identified Kay (Coburn), Donnie (McDowell), Raymond (Cattier), and Jerry (Linn) (although the Jerry could be Jerry Weymouth). I have good confidence that I identified them correctly. Since these kids were in the third grade photo, I believe there were in this second grade class – Mary is Mary Page Moss and Roland is Roland Rapp. I believe that Raymond A. may be Raymond Adkins, but he was not in the third grade photo. I have no recollection of Phyllis and Phyllis B. Other kids that were in the third grade photo that very likely were in this second grade include Sharon Konrath, Sheila Ewing, Dennis Pinkerton, Joan Shaw, Karen Hall, Jerry Weymouth (or Linn), David Reaser, Dennis Warner, Eugene Cornish, and Georgia Hunt. A very large class. Since Jean was in the class and you have contact with her, you might run the photo by her to see who she remembers.